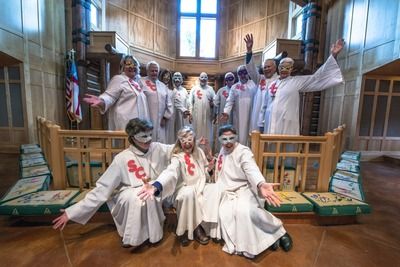 Want to Be a Superhero? Join the choir!

Did you know that our choir was voted Gold in the Best of Jackson Hole for the past several years?

Music is a joyous way for people to offer praise to God and to remember the truth that they have just sung. At St. John’s, music is important and we have opportunities for those with musical talent to make their own special offering.

The choir performs at the 10:00 a.m. Sunday service. Choir rehearsal is held on Wednesdays at 5:30 p.m. For information on joining the choir, please contact David Wagner at [email protected].

David, an Ohio native, received a B.S. in Mathematics and French from Hillsdale College. He holds an M.A. and a Ph.D. in French from Indiana University, where he specialized in 17th-century French Literature and History. While completing his graduate studies, he taught a variety of French language and English literature courses at the university level. David is a literature and mathematics teacher at the Jackson Hole Classical Academy. He has been playing piano and organ for church services since he was a teenager and has enjoyed singing in several church choirs through the years. Here in Jackson, David enjoys hiking, bicycling, camping, and snowshoeing in all the beautiful national parks and forests.

Kirsten moved to Jackson, Wyoming, from Texas the summer of 2012. Here she discovered her life's callings, motherhood and music. She has performed as lead vocalist for local bands, Calle Mambo and The Electric Bliss, back up vocalist for Zac Brown Band and various local bands. She has been a member of Cathedral Voices Chamber Choir since 2013 and performed with them in Carnegie Hall. Her own experiences serve as a testament to how the power of music can change peoples’ lives. After graduating from Trinity University with a BA in Spanish and International Studies, Kirsten served as Development Coordinator for the Autism Treatment Center of Texas, and later became a Spanish teacher at St. Anthony Catholic High School. She taught Early Literacy ELL students at Teton Literacy Center before becoming a mother to her children, Colton and Coral. She stays busy in the community and uses music as a daily expression of learning, loving and leading.

M4M is a community for mothers of all ages and stages focused on building mindfulness practices together. Free childcare offered. Bring your lunch!