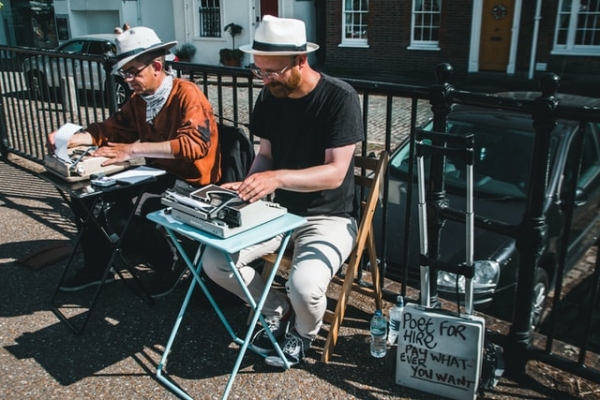 Last summer we hosted a poetry festival, “Wonder in Wyoming”, here at St. John’s. The brainchild of three poets who also happen to be Episcopal priests, Spencer Reece, Travis Helms, and Jason Myers, the event was attended by members of our congregation and reached many local poetry lovers from Jackson Hole and beyond. I remember another poet/priest once saying that he felt the best theology that has come out of our Anglican tradition has been in the form of poetry. I agree, if by theology we mean expressions of a sense of wonder at the mystery of creation and creativity in all its richness.

For me, good poetry speaks (sings!) to the head and the heart. Well-crafted words reflecting the Word, which we know to be love.

Padre Spencer has created a program at St. Mark’s in Jackson Heights, NYC, called the Red Door Series. He brought it here as part of Wonder in Wyoming, and it was well received so we were inspired to continue with it at St. John’s. Here’s how it works: A poet reads one poem, followed by ten minutes of silent meditation. The poet reads the same poem a second time, followed by ten minutes of meditation, then a short conversation with the poet concludes the gathering.

The Red Door opening will happen at 5:30 p.m., November 15 in St. John’s Chapel. It will continue once a month, the next reading is scheduled for December 13. I’ll be reading a poem at the opening, and we will invite local poets to participate in future readings. Come and see, listen, meditate, converse. Give yourself the gift of a quiet half hour of poetry. You deserve it. Thanks to Spencer for creating this meditative poetry practice, and for generously encouraging us to move it out west.